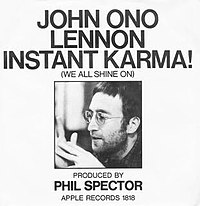 Till then, though, Yoko Ono is out there.

UPDATE from Bill Patry (I added an explanatory link):

John Lennon’s song “Imagine” is world famous, and I confess to both liking and disliking it . . . His widow, Yoko Ono, is a vigilant even enthusiastic protector of her late husband’s legacy, but has licensed a number of uses of the song, in the 1984 movie Killing Fields, at the opening ceremony of the 2006 Winter Olympics, and for use at Times Square on New Year’s Eve.

On June 2d, a district judge in the SDNY denied a motion for a preliminary injunction over the use of 15 seconds of the song in the movie “EXPELLED: No Intelligence Allowed,” finding that defendants are likely to prevail on their fair use defense. . . .

Yoko argued that there was no transformative use because defendants did no alter the song but merely cut and pasted it. The court though found that the use was transformative because defendants “put the song to a different purpose, selected an excerpt containing the ideas they wanted to critique, paired the music and lyrics with images that contrast with the song’s utopian expression, and placed the excerpt in the context of a debate about the role of religion in public life.” (p. 15)

The opinion is here.