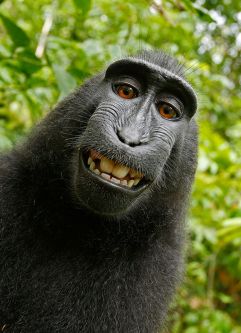 Patent Litigator Andy Dhuey is also representing Photographer David John Slater who has been sued by the monkey Naruto for copyright infringement. In the 9th Circuit Brief, Dhuey writes:

A monkey, an animal-rights organization and a primatologist walk into federal court to sue for infringement of the monkey’s claimed copyright. What seems like the setup for a punchline is really happening. It should not be happening. Under Cetacean Community v. Bush, 386 F.3d 1169(9th Cir. 2004), dismissal of this action is required for lack of standing and failure to state a claim upon which relief can be granted. Monkey see, monkey sue is not good law – at least not in the Ninth Circuit.

And there’s even more, in fact, from everyone all over the place, of course, but I like to link to blogs, so here’s also TechDirt, where Mike Slater wisely concludes, “PETA has even less of a right to the copyright in the photo than Slater — and Slater has none.”  And here’s LIKELIHOOD OF CONFUSION®’s own treatment of the controversy, courtesy of Matthew David Brozik, which precedes the present proceedings.

All very nice.  But if indeed it is a matter of standing, well, I think everyone is missing the point, which is this:

Walking upright on two legs is the trait that defines the hominid lineage: Bipedalism separated the first hominids from the rest of the four-legged apes. It took a while for anthropologists to realize this. At the turn of the 20th century, scientists thought that big brains made hominids unique. This was a reasonable conclusion since the only known hominid fossils were of brainy species–Neanderthals and Homo erectus. . . .

That thinking began to change in the 1920s when anatomist Raymond Dart discovered the skull known as the Taung Child in South Africa. Taung Child had a small brain, and many researchers thought the approximately three-million-year-old Taung was merely an ape. But one feature stood out as being human-like. The foramen magnum, the hole through which the spinal cord leaves the head, was positioned further forward under the skull than an ape’s, indicating that Taung held its head erect and therefore likely walked upright. In the 1930s and 1940s, further fossil discoveries of bipedal apes that predated Neanderthals and H. erectus (collectively called australopithecines) helped convince anthropologists that walking upright came before big brains in the evolution of humans. This was demonstrated most impressively in 1974 with the finding of Lucy, a nearly complete australopithecine skeleton. Although Lucy was small, she had the anatomy of a biped, including a broad pelvis and thigh bones that angled in toward the knees, which brings the feet in line with the body’s center of gravity and creates stability while walking. . . .

Although difficult to study, the question of why bipedalism evolved might come closer to an answer if paleoanthropologists dig up more fossils of the earliest hominids that lived seven million to six million years ago. Who knows how many species of bipedal apes they’ll find. But each new discovery has the potential to fundamentally change how we understand the origins of one of our most distinctive traits.

In other words, if a putative party is an ape, as opposed to a person, it is, axiomatically, incapable of standing.