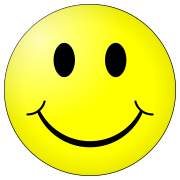 
Wal-Mart Stores Inc., which uses a yellow happy face to try to put its shoppers in a carefree mood, is saying — with a straight face — that it has exclusive rights to the familiar image, at least among retail department stores.

The world’s largest retailer is fighting a French native who has earned millions in licensing fees on smiley’s back since the early 1970s, when he began securing trademarks for the happy face around the world.

Trademark? For what? What’s the good or service associated with a smiley face? The article is a little confused. Later on it talks about copyright, which sounds more like a possible claim.

But the French? Claiming the exclusive right to a smile? Please!